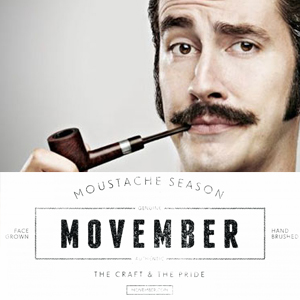 The conspiracy of the year! All these once good looking men walking around London (and other reported cities where the phenomenon has been sighed) sporting moustaches, horrible, Hitler-like, very brave and ugly upper lip hair growth that is not pleasing on the eye or on the girls lips (apparently – I wouldn’t know).

No one is forthcoming with any information as to what the purpose of the sprout is, the perpetrators don’t seem to be phased by it or by the attention (mostly laughter or puzzlement) they’re getting as a result of their facial disfigurement, very confused looks exchanged between the girls around the office but yet no answer as to what happened to the beautiful man who walks by our bank of desks everyday at 10am for his morning coffee, who ill-advised him to personify C. Chaplin! I feel like am walking through an FLN (1) bureau back in Algeria and want to shout! Where are your pot bellies!!
This reminds me of the time when all the girls on facebook wanted to confuse the boys and secretly agreed to announce on their status where they like to put their handbag when they get home, all the girls proceeded to posting the following status which baffled and excited men, who we all know have the maturity of 15 year olds (wink to a certain someone here);
“I like it on the bed” (really?), I like it on the chair” (my favourite), I like it on the radiator” (who does that?), I like it on the floor” (standard)! Yes we’re still talking about the handbag!
Or when we (the Ladiz) all agreed to announce a colour again as our facebook status, just a colour, pink, red, blue etc…men got further confused but it was none other than their bra colour in support for breast cancer research. I am just glad no one asked us to grow a monobrow for a good cause!
Well as it turns out, Movember moustache is an effort to promote men’s health and raise funds for prostate and testicular cancer, men sport the taches and women support their men by donating generously. So I stopped pointing and laughing at my colleagues and offered to sponsor their cause.