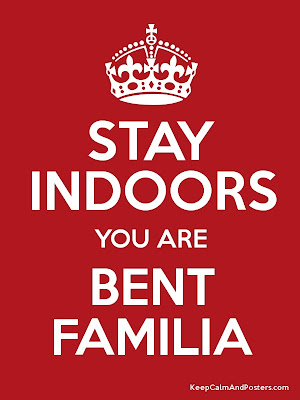 The other day, some guy for reasons unbeknownst to me, referred to me as “bent familia”*! I didn’t know what to do or say, my reaction astonished even me as I recoiled in disgust, I think it was the first time anybody called me that,to my face at least , I had never questioned if I would ever qualify as a bent familia or not but I always had a secret suspicion that I didn’t quite fit into that category.
I feel the prejudiced judgment this expression carries is too huge to consider it a compliment, so in response worthy of a 5 year old, I said “YOU’re bent familia”.
This way of complimenting a woman on conforming, on her ability to be a doormat, on her passiveness, it is the positive affirmation for adult woman, like saying to a dog or a toddler “good booooy” In an attempt to reinforce 'good' behaviour.
Congratulating her on the way she wears the jebba** and the way she tucks it into the sides of her knickers when she does the cleaning! Sexy! On the way she cooks her mother meals and in anticipation has learnt her future mother-in-law’s too, on the way she matches all her outfits and wears them all below the knee, on her miraculous and science-defying ability to remain a virgin, on the permanent smile she wears on her face, on the way she mimics old people and fits right in with them, on her robotic capabilities to sustain misogynistic male treatment and interpret it as Love.
Her favourite pastime, cardio and therapy are cooking and cleaning, her social exercise is gossip.
She is a Stepford wife in preparation.
The status of Bent Familia is elevated to the highest ranks of society ladders, high on a pedestal (with drawers for the detergents and the aprons). Something every girl aspires to be.
To be labelled a bent familia is considered the compliment, a high place of virtue every girl should aspire to reach, somewhere I don’t want to be, the girls up there are a tough crowd, I don’t fit in with them, they look at me with the same look I used to get from their parents as a child, like the bad influence friend, I want to jump out of this pedestal and look up their skirts, point and scream HA HA!
Ben Familia, is the good girl who played that role for so long, she forgot to stop acting, she can be a hypocritical pseudo-religious puppet who lives up to every silly expectation; she gets married between the ages of 23 - 28 and stays married, she doesn’t laugh like a hyena, she smiles but never shows teeth or makes noise over a 0.2 decibel, her hair is always smooth, tamed and in a the same colour (whereas you probably look like an electrocuted tabby); she matches her bag to her shoes to her bra and knickers (you don’t even match your bikini), she’s considered a safe asset, an innocuous choice (you’re a liability at best of times), she can make a 3 course meal out of an onion and an egg, she is extraordinary in the ordinary, her beauty is subtle, in her shyness and vulnerability; she talks softly never raising her voice (...I GOT nothing), there’s a term for it…Settouta!, she’s as graceful as a mermaid (half tuna, half human), she has a roomful of wedding/marriage (trousseau) items she collects since she was 12, she can pull off any djebba or kaftan, with a full cleavage and love handles that magically appear (you barely look like an adult), she is a virgin, she never had sex, her name is Monica Lewinski, her cousin and her neighbour Omar are her best friends, she never goes out when it’s dark, she wouldn’t upset her dad and brothers.
Oppressed by the patriarchy, It's the only way she will ever leave her parents’ home and the only way she'll keep a roof over her married head.  She has to put up and shut up.
She makes you look bad, you want to hate her but you can’t, she does no wrong, she’s the good girl and you are no match for her.
Dz-chick…bent A familia just not that one!
-------------------
*Literally it means “daughter of family” but figuratively “the good girl”
**A house dress (long, and preferably sleeveless to allow you to do the house work)
Posted by Dz-Chick at 15:48:00 33 comments: