A bad case of the Dates! 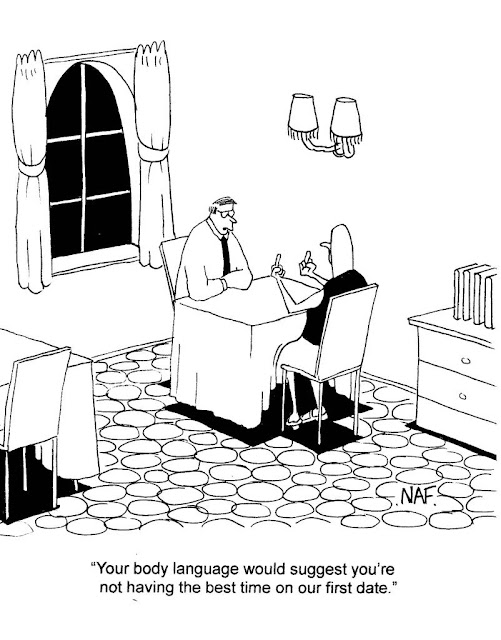 Soooo I thought I’d stay faithful to the blog title and write about ….guess what?

Oh yes…this year? As ever I remain single.

Comes another misguided attempt at setting me up this year; the guy called, he was so loud I had to pull the phone away from my ear a couple of times, but he kept getting louder, I had to check the sound setting on my phone!

As well as being loud, he was also obnoxious, the type of guy I would definitely slap at some point during the date and pretend there was a fly on his face because I am sure he’s the type who’d hit back.

He alluded and not very subtly to the masses of disposable cash he has access to, he enquired if I had ever been to Ibiza because everyone knows that’s the ultimate reference in terms of travel, he asked how many languages I spoke on top of the obvious Arabic, French and English, evidently when you’re Algerian you need to speak a fourth language to impress as three is just the norm. How dull!

Hang on, there’s someone at the door, will go see who it is, but I am coming back to finish this rant. Hmm I could see a lady who looks like a Jehovah’s whiteness…”I am already on the path of the righteous and Jesus rocks, your work here is done” I look again, the lady shakes her head and heads to the my next-door neighbour.

Back to the Schizo dude;
He took a great deal of effort to shout something at the waiter in bad Italian, trying to impress me, so to answer his question I said: well I do speak Italian fluently :) yes yes I smiled, I am sure he could feel my smile. This was beginning to be fun...

He also said his name was something then left a voicemail with a different name! Alarm bells stopped ringing, there was no point, I was only continuing with this charade for my own amusement.

He insisted, he just wanted to see what I looked like (shallow anyone?), then insisted I travelled all the way across London to meet him for a drink, but it’s ok, because I could bring a friend if I wanted to!!!
When I suggested we meet half way, he got louder if that was at all possible and cancelled on me. How could I suggest to a Chelsea man to venture out of his manor! Anything beyond Knightsbridge was considered a foreign land. Oh this is getting more fun…

It’s always fun to listen to the assumptions and pre-judgments people make about you before even meeting you, based on my being home at 10pm on a weeknight, apparently I am no fun, he said and I quote “home on a Thursday night? You’re an old woman! Man”, he then told me off for being a bore because I was asleep when he called me at half past midnight one Sunday night.

Then I really had to ask, “How young are you exactly” and he proudly announced he was 50. So I rest my case and hang up the phone.

That’s when I thought, ah what a girl has got to put up with in the name of blogging.

But you all know dating has become a new national sport after Football and Cricket, all of which can be action packed though a little dubious about cricket which can be a dangerous sport, yes yes you can die of boredom.

Dating however, is most definitely action packed, well the last time I remember anyway, you never really know who you’re going out with, looks, profiles and pseudos can be very misleading unless you’ve been introduced by a friend of a family member, be assured you will have a few surprises, not to say that your family and friend’s introductions are without concern.

I had to do some research with friends who are actively dating and reporting their horror stories.

Kate met a guy ironically on Anti-valentines day*; she met Mark, he texted the next day and asked her out – happy days!
Kate and Mark went out on a date, she wore her lovely red dress and she looked stunning, he came in a pair of trouser she couldn’t make out if they were flares or bell bottoms, she looked around to check she was not in an 70s theme bar, sadly she was not.
Mark bought her the first drink and they clunked glasses, so far so good, then as his pint glass touches her delicate diet coke he looks her in the eyes and says: Chin Chin Moverfucker” jaws drop – silence – excuse me? So then he says “you’re supposed to say Chin moverfucker chin”

She bares and grins and wishes she could have her time back.

Monique and the neon lights!

Monique is on all dating sites known to men, including Alien lovers and loveisforsissies.com, she gets snapped up quickly because her profile picture is from her 20s and she wasn’t jowly then. He wore a sleeveless t-shirt, had a smile that showed way too much of his gums and had about three chins. He took her to a ghastly bar in Leicester square where it smelt of cheap cologne and old carpets, she excused herself to use the ladies, on the way down she saw the shiny EXIT sign…it was warm, yellow, glowing and inviting….so she buggered off.

Nicola and the Urinals:

Nicola vouched it would be her last date, it had to work, she couldn’t go through the whole thing again, the butterflies, the hair, the preparation, the outfit, the waiting, the anxiety, she vouched to make it work whatever happens even if he wasn’t into her, she’s gonna make him – God help him.

He must have forgotten to brush his teeth, she could see bit of broccoli, mental note! Not kissing this one, unless he manages to swallow the broccoli with his pint!

Nicola goes to the ladies, the toilet sign was too hard to decipher and she ended up in the gents, faced with a man at the urinal, she gasped, he turned around and chirpily says “alriiight?” she apologised and ran off to the ladies room giggling like a teenager, when it was his turn she advised him the Gents was on the right hand side, he came back saying “you either don’t know right from left like every other women I know or you’ve done it on purpose, I just got chased out by a bunch of angry pussy posse” RIGHT she says and storms out of the door, on the way out she screams: “Oh and you can’t finish my beer, I spat in it”

Nobody is normal anymore. They’re all crazy.

The strike continues…in the meantime; feel free to share your horror dating stories…