Go back to Nicaragua! 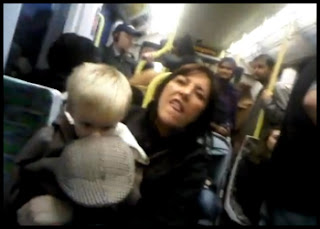 What can only be described as a fantastical moment took place last week on a Tram in Croydon, South east London.
A woman by the name of Emma West, was sitting on the tram with a child on her knee, hurled racial abuse at a whole carriage of passengers who sat in awe of her, the video which was secretly filmed by a passenger, was later leaked to Youtube and has had over 5.9 million hits on youtube alone.
The tirade was relatively poor in my view; at some point during her expletive-filled rant, she inched very close to using the word nigger but in a fast and rare moment of lucidity, she  managed to change it to Nicargua “go back to niggg…caragua” she said.
A young black man was about to retaliate but was quickly calmed down by another passenger and was consoled as he was seemingly upset by the abuse the women in question was hurling with fascinating conviction.
The transcript of the rant goes something like this:
“What has this country come to … with loads of black people and a load of f—— Polish,”, “sort out your own countries, don’t come and do mine, Britain is nothing now, Britain is f— all, my Britain is f— all now.”, “You ain’t English… You ain’t English either.”; “you ain’t English either…you’re black”, “go back to fucking niger…argua” …
I was laughing throughout the whole video, I found it utterly shocking and quite ridiculous, I thought about how I would’ve reacted if I were on the same carriage and I came to the conclusion that I would have had to ignore her and not dignify her accusations with an answer, but I also believe that if it wasn’t for the child she used as human shield, she would have been sorted – Kung Fu style, having said that I am glad nobody attacked her and made her the victim.
Emma West, 34 (West seems to be a popular name for weirdoes – apologies to the normal and respectable Wests) from Addington in Croydon, was arrested on Monday 28th Nov by the British Police on suspicion of aggravated public order offence.
I think she was arrested for her own protection as she is rumoured to having received several death threats, turning her into the victim in need of protection. Bravo! 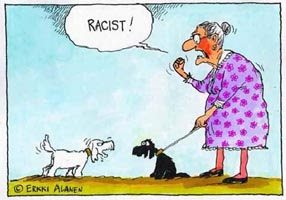 Now my 2 cents:
I have lived in Britain now for a long amount of time, and have never felt an outsider, I never considered myself to be different from any English, French, Black, white or Chinese counterpart, I am an individual, my abilities and attributes are measured by my principles, morals, integrity and intelligence, not by my skin colour, size or nationality.
Now, being Algerian is a bit of a problematic given in our integration in any society, if we speak specifically about the UK or another predominately white society, we’re always confused by the fact that geographically we’re Africans; politically we’re in categorised as Middle-East, and culturally we’re North African with a strong French influence, sub Saharan Africans recoil at our North-African stance,
You’re not Africans, you’re Arabs, Arabs say you’re not Arabs you’re Berber, and the Berber say no you’re Arabs not Berber.  We don’t belong to any certain culture, we have our own, we have to embrace our origins, be it African, Mediterranean, French, Arabic or Berber and that’s what makes us Algerian.


So we agree we’re Algerian (I know, a little over simplistic – but you should know I am highly intelligent and came up with solutions to life long anthropological questions).
As an Algerian, you move abroad, and you stand in front of an immigration information sheet
please tick your ethnic background;
Black: I could be and my best friend is black, honest, I am not racist…
Chinese: NO (but the new & upcoming Algero-Chinese race might need a mention)
Asian NOPE
British white: NOPE
Irish white: NOPE
Other white: YES
Arab: YES
Other (please specify): specify what? that I am an alien?
I personally stand in front of this confused, as an Algerian I could be black and I could be Arab, but I am blond, so I am other white no? No you’re Arab African and a Muslim.
Jesus was Middle Eastern; don’t believe the movies that give him blue eyes. And a ginger beard, for all you know he could uh uh uh god forbid Brown!
Colour is not a religion or a culture; it’s just skin pigmentation that is biologically attributed to evolution and adaptation of the human being to his environment. Racial classification according to skin colour is the result of racial classification by anthropologists and scientists in what was called scientific racism which was denounced after the end of the Second World War and the Holocaust.


Actually reading back, all of this seems so ridiculous to me, aren’t there more important things to worry ourselves with than skin colour?
Mark Twain (his 176th B’day today) said:
Such is the human race; often it seems a pity that Noah... didn't miss the boat.
Watch the horror here
Dz-Chick…simply Algerian.
Posted by Dz-Chick at 18:40:00