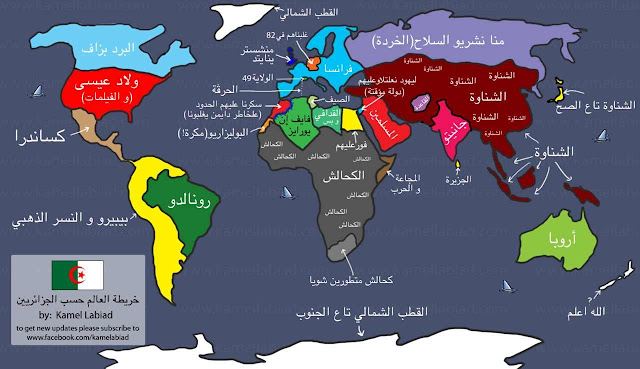 I’ve been staring at this map for a while now, trying to make sense of it. As much as some parts of it are sarcastic, predicable, funny even, it remains extremely ignorant.

First thing that should jumps to you head, is to enquire: WHO the hell do you think you are? Then comes a series of other thoughts, sighs, some infuriating, others just humorous and endearing, but mostly I’ll have to stick with shock horror.

Let me take you through this “hilarious” version of the world according the average deluded, ignorant and quite funny (in a fucked up way) Algerian.


- Let’s start by the centre of the world and of this map. Really where else? Algeria.

Algerians are strong believers in the evil eye and hence it literally says 5 in your eyes, which of course you should know refers to the hand of fatma  which is the symbol of the evil eye warding annulet or whatever it actually meas. Of course Algeria is green because it’s so prosperous, I can only presume.

* To its left you’ll see the Red Morocco (I assume because of the Red Moroccan flag but who knows) but I will have to contact the author Kamel Labiad. Our reference is “We close borders on them, because they always beat us”, yes Algerian-Moroccan borders have been like revolving doors, closing and opening due to may political and sometimes outrageously silly reasons I cant quote any. Don’t ask me. As for the “they always beats us” that’s just defeatism my dear Kamel, it’s so middle class.
* Just below that you see the little amber land of Western Sahara aka POLISARIO – just to piss off Morocco. Need I say more?
* To the right of prosperous Algeria, you see Tunisia, it’s also green and labelled simply and concisely “summer” hence that’s where a large number of Algerians head every summer for their yearly vacations. Nothing more, nothing less.
* Then comes another green land, though it ought to be pale and yellow, Libya. The only reference for it is GADAFFI and that’s it quite rightly, when have you every heard of someone else from Libya besides Gaddafi? Ok maybe that psychotic son of his. Did you know Gaddafi has his own wax work at the London Mme Tussdauds Museum?
* Ah no too fast. There’s a Yellow land next to Libya is a once upon a time great land called Egypt, our sources coming mostly through and from football it says “we’re better than you”, because even when Egypt wins we are still better than them. That’s just the way it is.
* Besides these amazingly important countries, the rest is of course BLACK as night, anything sub Saharan is black and is AFRICA.
* Safe for the little brown corner on east Africa where it says Hunger and drought and of course South Africa right on the edge of the African continent, who are seen as “slightly more civilised blacks”. That’s fighting talk.


Notice how colours start to cheer up as you head northward towards Europe?
* Everything in Western Europe is refereed to as FRANSA, the source of all civilisation, I think we ought to add “where bananas come from” safe for Marseille which is of course the 49th province of Algeria. Really France ought to hand it over.
* Germany in randomly or not, Orange, as you MUST know, Algeria played Germany in the Football World cup in 1982. They will never EVER forget it, by that I mean, we will never let them forget it.
* The huge purple land is our 3rd /5th hand weapon dealer, Russia, in bracket is: where we buy hand me down weapons.
* Below that, the red land of communist China, I am guessing…
The red land of the Chinese spreads as far as Australasia and all the way to Turkey and parts of Eastern Europe, of course they are Gog and Magog, they must have turned everything on their way to CHINA or devoured them all.
* AL QAIDA is thrown in the middle of it all in purple, presumably where Afghanistan is supposed to be but off by a few hundred miles, of course not eradicated by the Chinese, because….yeah.
* If you are any good at Geography, you’d know where India is.  My job is just to explain what it says: Janitou. An old Bollywood movie telling the story of a young handicapped orphan child in India called Janitou. Back in the day (70s) Algerian TV played this film every Thursday afternoon (beginning of the weekend) and everybody knew the words to Janitou, it became the co-dependant national anthem of Algeria.
* The red land there where Saudi Arabia is supposed to be is of course “The Muslims”, the holy land of Islam and where Islam is claimed.
* The small blue dot clinging to it is “The dammed Jews” and in between brackets it says “temporary state”, is it temporary or imaginary state?
* Japan is in the pacific, sitting in yellow and labelled “the real Chinese” which I think is random, or maybe they have been better represented in the movies than the Chinese, with martial arts and other stereotypes and generalities I don’t feel like listing.
* Australia is green and called Europe, because obviously it’s another green, prosperous land to be conquered or illegally immigrating to.

The North Pole sits in a white lump; the South Pole is labelled “the north pole of the south” …as I type this, I feel almost silly really covering this.

The American continent is spilt into 5 parts, Canada/Alaska become one ice bucket in what is labelled “too cold”, the US of A is in red and labelled “sons of Christ and movies” for obvious reasons, Mexico in brown (I wonder if the colours are actually relevant to these misconceptions) is labelled “Kassandra” and this is perhaps not as obvious to you, it is in fact in reference to a Mexican soap that was broadcasted in Algeria that was dubbed in Arabic.

Then Ronaldo for Brazil because everyone in Algeria can tell you where Ronaldo is from, funnily enough they can also tell you where Maradona, Thierry Henri and Beckham are from, because Football is a national affair you understand.


The yellow part of Latin America is where “Pepero and the golden Eagle” reside, I have a vague recollection of this cartoon shown when I was a kid back in Algeria, and I think Pepero was from South America somewhere.


And finally let’s not forget about Great Britain in dark blue, which of course says “Manchester United” the greatest football club ever until Barca came along? I don’t really know or care about football

The above are not my opinions or those of the author or the picture Kamel Labiad, but those of the below average Algerian who views the world through their TV sets, cartoons and soaps, through football and old history taught in school before he left (school). The Algerian who thinks anything outside of his territory is alien, negative southward and positive northward, expect for South Africa, it’s a special case.


This is not an insult to Algerians, to Blacks or Chinese, this is just the poor and obvious ignorance of a segment of a certain nation, and how they view their imago Mundi, and I don’t think the Polish, French or American imago mundi would be so much different. I would love to see the American one in fact.