If I were the queen of everything! 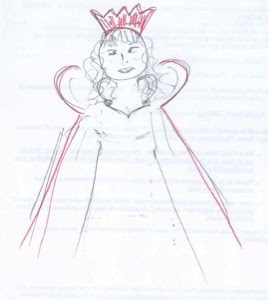 I have fond memories of my childhood, when my sister pulled at the fine hair just above my ear where it hurts the most and made me confess: You are the queen of everything, then as soon as she released me, I’d run away and instead of cry I would just laugh because we were already smuggling peanuts and stuffing our bras and we were clearly too old to play that game.

Now that I am older, that my breasts are real, and my issues are surreal, sometimes I sit and think if I were the queen of everything…

1- I would fine anyone donning more than one Burberry item, except if it’s a baseball cap – then they get shot.
2- I would be fluent in Politics
3- I would ban double denim combos
4- I would design the police outfits myself and make the men wear breast metal plates
5- There will be a weight limit with a 10% margin; a FAT tax will be imposed beyond that.
6- I will have my own castle on the clouds above
7- I will kill all whingers, moaners (so that rules me out then…)
8- I would cancel periods
9- A version of the Matrix will be offered to people who can't face reality and prefer to be plugged into a fantasy life.
10- I would cancel Mondays
11- Ban reality TV – FOR EVER
12- Make male circumcision mandatory
13- Telemarketers, recruitment agents, Estate agents etc …will be put on a boat and sent off to the wastelands of Glasgow.
14- Create a force-field around platforms to stop people from jumping under trains and disrupting our lives, in fact ban trains and everybody can fly to work
15- There would be no cleaning
16- I would ban dentistry, there will be a pill...Still working that one out!
17- I would make everyone read my book
18- A chocolate brownie with hazelnut ice-cream would be a healthy snack
19- Women wake up looking gorgeous
20- There will be a Ratio of 3 HOT men to 1 woman
21- Ban clocks, time is relative, I want my reign to be a causal casual world
22- I would ban questions like: where are you from? Followed by where is your niqab?
23- I would have Einstein and Sacajawea regularly over to dinner.
24- I would ban Saudi men from driving and they’ll have to wear dresses – Oh that’s right, they do already!
25- There’ll be no hangovers – haven’t worked this out, by I’ll have my scientists find a way to remove side-effects from Alcohol consumption
26- No celebrities allowed, if anyone starts to get famous, he/she will be shipped off to Glasgow
27- Ban bingo games
28- I would appoint my king consort by measurement criteria
29- If my King were to try anything funny, it’ll be off with his head
30- I wouldn’t have to say: you’re the queen of everything to my sister
31- There would be no sisters

In fact, if I were the queen of everything I would be so bored, because I’d have everything, I prefer a world where I am not queen, where men are elusive, where everything is a fucking struggle and whingeing is tolerated. This game was much more fun before-breats, post breats is just tragic! I hope you like my drawing.