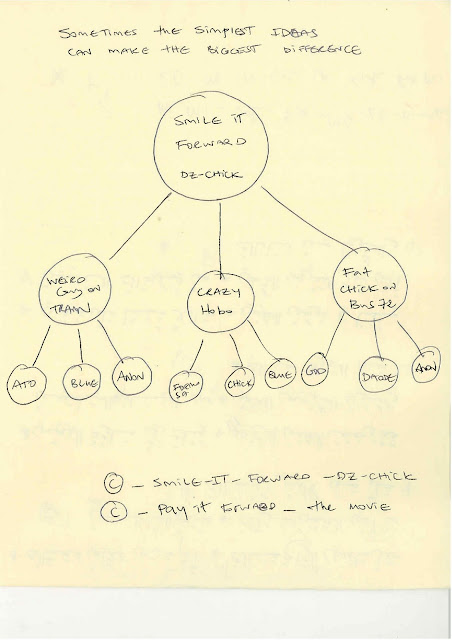 Another dreadful journey on London underground this morning, amidst all the armpits, newspapers cutting into my cheek and stale beer stench, something strange and wonderful happened, someone smiled at me, it was puzzling at first, then uncontrollably my facial muscles contracted and produced a smile (a beautiful smile at that) and we both acknowledged eachothers’ wretched position, from that point on, I forgot the smelly armpit, the leftover curry and the bad cologne and just wore a faint smile on my face that relaxed my tense muscles and I thought: it’s not that bad


So I went on about my interminable journey to work, my facial muscles relaxed and poised, I smiled at the next person who held my gaze, she smiled too and then it hit me…

It’s infections, you can catch it like the flu, it spreads like it was airborne and changes the atmosphere. It reminded me of a movie I watched once that made me weep like a child “paying it forward” based on the novel by the same title by Catherine Ryan Hyde starring that little cutie pie of a boy who started a movement called pay-it-forward, whereby he does one act of random kindness to three people and instead of having them pay him back, he asked them to 'pay it forward' by helping three other people, who would then each 'pay it forward' by helping three other people, who then go on to do the same in the hope of changing the world, of course the little boy died and it was all very sad and Hollywood like. 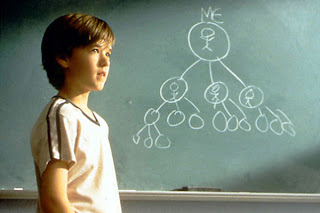 I started reading on smiling, the physiological and emotional side of it and I became fascinated with smiling, in Islam, it is said that a smile in the face of others is considered charity or a good deed, and I thought that was so beautiful and I can see how a small facial contraction as it were can have huge effects on a whole group of people, a bit like a butterfly effect.

So I take it upon myself to always smile and smile back when people smile at me and sometimes you don’t know why you smile at some and not others and no it has nothing to do with being attracted to that person, notice how it is always women who initiate the smiling, old people smile, children smile and sometimes they stare at you in fascination (in my case it must be due to my striking beauty), don’t get me wrong, I am not walking around like a smiling moron flashing my teeth, the wrinkles are just not worth it, I endeavour to draw the line at a faint smile but certain people you cross on the train or the shop insist on sharing a thought or a joke with you, so again you smile (showing teeth this time) and nod in agreement but secretly hope it'll be the end of this chapter, but it usually never is!

Notice how it’s always women who smile at other women, children or older people, never at men, a women smiling at a man could be perceived as an open invitation or forward flirting and vice versa thus people of the opposite sex seem to refrain from this odd behaviour, unless there is an actual attraction but seeing that we live in England and males behaviour is fuelled by beer, women will continue to smile and support each other, I don’t want to hear anyone whinge about what a waste it is a lot of beautiful women are lesbians though.

In Graph 1.1 above, I have demonstrated clearly and with obvious elegance and skill, how this is going to work for the recently lobotomised and the ones who don’t’ speak English (no correlation between the two).

I smile at three people a day, in turn these same people, will each smile at three other people and so on and so forth and we watch the wrinkles grow and good mood spread…maybe this will shift the energy around us and ……(insert more Anthony robins crap here)…making our worlds better.
Are you cringing yet? Well you should be.

The point I am trying to make is: smile it really isn’t that bad.
Despite all your cynicism, frustrations and hormonal imbalances, smiling is the only thing that is consistent and can alter all the negative feelings you may have and it really is an inexpensive way to change your looks, I mean have you ever seen a smiling face that was not beautiful?
Dz-Chick…smiling always :-) but with good anti-wrinkle cream