If the shoe was on the other foot! 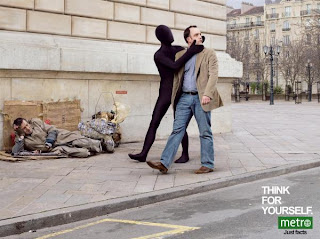 A homeless man sits on the stairs of my station exit, he sits in a far corner away from the stampede of the commuters but he remains an inconvenience for us despite our best effort to remain humane and generous, we cannot help but feel he’s in the way not because he physically obstructs our way but because we feel guilty we did not acknowledge his pleas for spare change.

He sits there with two Café Nero cups, one jingles with coins and one I hope has coffee in it but never got close enough to find out, I often make a point of stopping and offering a chocolate bar or a banana or some change with a “promise you won’t spend it on booze?”, but over the years any naïve effort to donate gets eroded by cynicism and distrust and you wound up saying muttering a wimpy cowardly sorry

How many of us walk by a homeless person every day and how many of us give generously or give at all? And moreover do you even notice them or have they become part of the background for you like the red telephone box or the Big Issue guy.

I often think, if I lost my job and had no money to pay rent and no where to go, would I not become homeless? How many out there are one pay-check away from being homeless?
Nobody is safe from homelessness; we might be lucky we have friends to count on and still have parents we can run back to, but a lot of people are not be so lucky and empathy is not everybody’s cup of tea…

What have you done to help a homeless lately? Do you feel it’s your duty to help? Most people believe the people on the street are homeless by choice or as a result of their substance abuse and addictions or for being ostracised by their friends and families, we are too busy judging instead of helping them.

Though we judge them and ignore them sometimes, we do have a kind of relationship with them, there is always a local homeless everybody gets to know, squatting by the cash point near Tesco or by the Tube station, cuddling up to his dog, the dog has a dummy or a cuddly toy and they sit there with their sad faces, making us (maybe it’s just me) melt at this sight and dig a little deeper into our pockets or lunch boxes. When you think you’ve given enough for the day or not in a charitable mood, you say sorry and it always amazes me how they remain polite (in London anyway) and smile and say thanks, God bless. Thank you for acknowledging them.

You know what I think, I think the homeless community in London specifically hold secret policies about how to be a London homeless, they seem to all be in agreement about how to treat us “punters”, they know being rude or ungrateful wouldn’t work, so their “elders” must have sat down and decided on what’s the best way to do it, after all a homeless person can only be saved by person who isn’t.

You might have had a different experience walking down Edgware road or some other street where a number of beggars (they are not actually homeless) who work the streets cradling babies and begging for cash to supposedly buy nappies and milk or get a train home or save enough for a night in the shelter etc… when you say sorry they either follow you until you cave in or they slur profanities or even spit at you (that’s assault you know), these organised gangs of professional beggars I do not empathise with or even acknowledge, because there have been reports (according to Westminster Council) of growing numbers of professional beggars who earn up to £300 in tax free cash a night to supplement their day jobs or re-do their kitchens (daily mail – I don’t read it I promise).  Thus ruining it for the genuine homeless and needy people who actually in the streets freezing to death, but if you are a well-meaning giver you have to learn to make the difference and make sure your hard earned money is being put to good use.