The impossibility of being Free 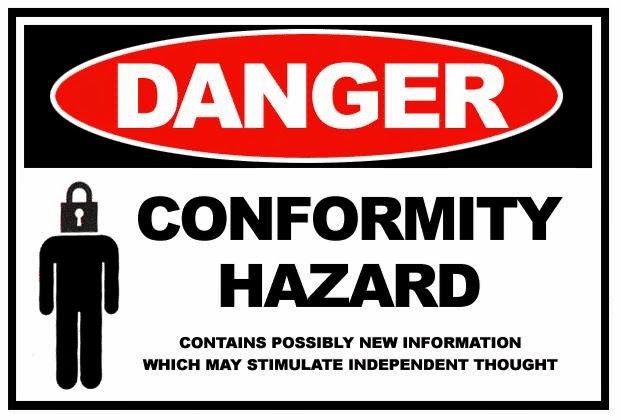 Lately, I let go a little, started to wear baggy trousers (God bless that elasticated waist), let my hair run wilder and spotted a few holes in my socks, knickers and now shirts, I let go!! I think this is due to the fact I believe I am naturally beautiful so basic grooming suffices, though I noticed men only  check me out when I wear my hair conformingly straight, it’s like I fit more into their mentally-etched image of the type of women they could consider suitable, because anything curly is considered foreign, wild or difficult.


One day on a plane back (to London) from Algeria, the guy sitting next to me asked me if I was Algerian. And that got me thinking, even if I looked painstakingly English (which I don’t), the very fact I was on an airplane flying back from Algeria could considerably improve the chances I was in fact Algerian. I acquiesced to his delight that I was indeed Algerian and to continue with the charade he said well you’re a bit Shoreditch! A free spirit?  Ha ha ha I said to him ”No I am Algerian, I can’t be a free-spirit” he didn’t get it. Then I went back to my nap from which he had yanked me to question me about the freedom of my spirit and I started to think about that ….and stuff!


A bit Shoreditch?? Moi? Well I never! Anyway, a long story not so short, that got me thinking about the nationally agreed Algerian look and how wearing baggy trousers did not fit into it.  But more about the very notion of “free spirit”, how it got highjacked and “shorditified” as if all the twats prancing around Shoreditch in those uber-skinny jeans or baggy trousers (depends on the level of Artiness or Lositude…or somink), blazers and beards are free spirits or true artists. You can’t be the free spirit you’re dressed to be if in essence you are actually conforming to the Shoreditch image. Conforming being the operative word here.


As an Algerian, who considers herself a creative being I realised I could never claim to be a free-spirit simply because I know to attain the status of true free spirit I’ll have to live a life of a hermit away from all societal coercion, religion or any political distribution of power and social tourbillon of conformity somewhere I can live off the land and recycle my own pee. But perhaps I can claim the title of a rebel, who doesn’t reject all societal obstructions and rules but fights some, rejects some and accepts some.
Besides the Algerian free spirit does not exist; “they” just won’t let it happen! They’ll use the weapon of mass oppression, the rolling of the heads with the lips in a downward line, they will laugh at your strange dress sense and curly hair or semblant of afro you’ve been nursing for the last 3 years with no convincing result; They’ll say it’s just a phase, your hair will be straight again one day, and they will attribute your beard to religious beliefs to save face with the neighbours or will coerce you into shaving it, it’s inevitable. If the phase lasts too long, then it could be a case of hormonal instability or it has already been decided you’re a sore loser and all your quirkiness is nothing other than a mean to hide your loositude (new word)!  It’s just not you, so stop trying to stand out and go get married or something, your peers got married and died already and you’re still wearing baggy trousers and leather bands on your wrists! Seriously!


So to recapitulate; if you have: A pair of baggy trousers or über skinny jeans, some kind of rainbow old t-shirt, quirky jewellery and rubber bands, curly natural hair and no make-up, wash your hair less than once a week, don’t own a deodorant, own a rusty old vintage bike, by vintage I mean stolen and have a jumper with a hole in it, have enough creativity to border on neurotic, the unexplainable desire to break rules and just the right amount of weird! Then you could qualify as a conforming free-spirit! But you’ll never reach full potential or what Nietzsche calls “The Free spirit by excellence”
What is striking here is that even the rebels, free-spirits, artists and anarchists who boast individuality and rebellion find themselves following a certain look, a certain lifestyle, they are manipulated and affected by the same ideas and images and flux into the same urban worm-holes and nukes and crannies of the city (any city) to live amongst other similar-minded people, to escape the more rigid, superficial and shallow sides of the city (again any city) only to find themselves delving into a not so different social tourbillon of conformity and end up pigeonholed like I was on that plane and put in the Shoreditch box.


Conformity and rebellion are part of or two side of the same syndrome, because both are reactions to the same pressure source, though there are those who secretly question society and conformity and there are those who secretly conform like the Shoreditch crowd and whatnots. So you conform secretly, when you straighten your hair until its burnt smell is recognised before you come into view, or when you iron your trousers (focusing on that line that parts your thigh in two -yeah you know who you are), you conform when you think being a free spirit is a way of attracting attention and is often a call for help! You also conform when you become the source of pressure!

Isn't it scary (and a bit boring frankly) to live your life exactly how someone else's or because someone else decided on the status quo and you are just living it within a line drawn by a parent, a teacher or an authority figure or entity?  And every time you try to peer outside of that marked line, you’ll be called a rebel.  It almost feels as though the “free spirit” label was invented to fool people into thinking they attained and are in fact allowed to attain a certain level of free thinking and being without any barriers.

So my point is (finally got there), you can be free to dress the part, but your spirit is far from being free as long as you are shackled by temporary possession and pleasures and can’t resist the tug of conformity and the imposing dams of society, you will spend your whole life a laver never turning into the butterfly.