What about them love handles! 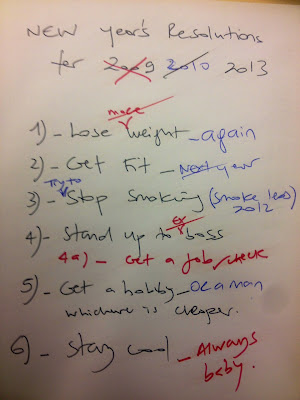 As the year draws to a close and end-of-year celebrations draw near, everyone
looks to home, some go home for Christmas, some go home for Hanukkah, others just go home whilst others stick around and watch as the city empties of its occupants.
We indulge in the party season with good mood, love, guilt-free relaxation, encouraged binge-eatingand old jumpers. We think about the lapsing year, of our achievements, mistakes and experiences, look over the new year’s desolutions resolutions we set ourselves at the beginning of the year with great enthusiasm, you probably can’t remember any of them and can’t find your diary either, maybe the dog ate it.

As you see from the illustration above (another one of my creations), they tend to be vague and unquantifiable, they are designed that way by ourselves, we set ourselves vague, unrealistic and usually immeasurable resolutions not because we think so highly of ourselves and our abilities but because, quite the opposite, we think ourselves too small players in the quest of our own goals then we fail because we expected ourselves to.

If you think about it, if you are hungry, you don’t “resolve” to eat dinner, you just find some food and put it in your mouth, the same if you want to lose weight, well you just stop putting so much shit in your mouth. SIMPLES.

We live up, or rather down to our own expectations, through the never ending pool of excuses perpetrated through everything else we strive to achieve in life, such as: I am too busy, too fat, not creative or not smart enough; we simply cannot trust our abilities to achieve through our cynicism.

This is the bit where I show off about how much I know: “A 2007 study by Richard Wisemen from the University of Bristol involving 3,000 people showed that 88% of those who set New Year resolutions fail, despite the fact that 52% of the study's participants were confident of success at the beginning”1

So why set resolutions when you know they go in one Year and out the other?
We humans are such conformists, despite what the economics of gym memberships illustrate, we like to blend into the January-gym-crowd, join the organic-eaters movement and the group of “we like to learn something new this year”, then our cynical side takes over and that short lived enthusiastic wave disintegrates usually around a massive burger and chips, leaving a deflated, discouraged and probably depressed self as we simply give up and dive into a tub of ben&jerry.
As a result, we become guarded and think small, always waiting for the other shoe to drop, we’re used to hearing “I told you so” and your friend with a smirk would always say “I knew it!!”
Unfortunately, the cynic may come across as cool, analytical and smart in a society where cynicism is encouraged and proclaimed savvy but there’s no inspiration in cynicism and all our resolutions will be buried by February if we don’t drop the cynical act.
If you’re not sure whether you’re a cynic or not, here’s a pointer: on New Year’s Eve, do you stay up until midnight to see the New Year and celebrate it; or to make sure the old one leaves?
The word resolution in itself became a trigger for pessimistic thoughts of failure and stoppage, somaybe if we altered our vocabulary and used goals or targets or something we are used to completing or closing in our day to day life, this will trigger thoughts of self-belief and achievements within us, it reminds us of something done in the past, not the impossible and the unfamiliar (just not losing those 10 pounds then! dammit).

These goals need to be small, measurable and actionable like lose 5 kilos instead of 10, learn one language not 2, remain obnoxious (piece of cake), loud and semi-sociopathic (I am there); learn to play an instrument or at least locate the chords (meh), find a soulmate (I did his name is David Copperfield), lose five (or 15) pounds, read at least 50 books this year and finally apply for new job before bonus time.

I came to the conclusion that our brain will compute smaller goals better (don’t say it’s obvious because you obviously didn’t think of it), it feelsmore achievable and therefore we will stick to it, but don’t underestimate the cynic in you, besidesthe gym is full and there’s a joining fee, classes are overcrowded, there are queues to use the machines and not enough time to wipe the sweat off them apparently, it’s too cold to exercise outdoors and frankly who can be bothered, trains are overcrowded, it seems cycling to work was not on anybody’s new years resolutions list.

Slimming World and whale weight watchers are raking it in; I’ll give them until March.
Sales are on and your credit card has a life of its own. The universe is conspiring again us.
Is it just me, or does everyone suffers from this schizophrenic fight between the cynical and the optimistic side of us?
So the plan is by the time you get to the next year, you will enjoy a whole new you, with a new set of skills and a few pounds lighter, because each and every one of us is a different person every year. I am done patronising and will now let you ponder this quote by Thomas Edison* “If we did all the things we are capable of, we would literally astound ourselves.”
I pondered it and decided I am going to be hopeful, it’s not a resolution it’s more of a decision to alter my subconscious and let my closeted hopeful self come out for a bit, see if she’ll do any better…Feel free to join…you have until the 21st Dec 2012 2.