Upon a beautiful evening in , I witnessed Hala Ali, a Strong, beautiful, fiery and inspirational Saudi Woman reciting a poem she entitled “Mr. Khaleeji Man”. 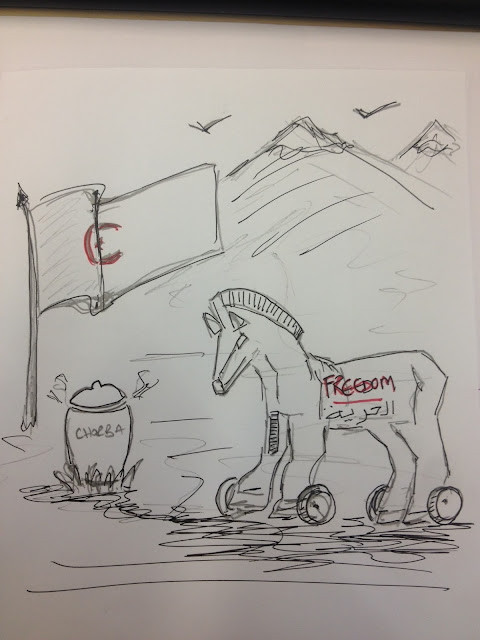 
His identity wages wars, his religion is his weapon

He is black, he is brown, he is ginger, he is white! What? That’s a blunder!!

He is mixed, he is pure, he is African from the North

He supports the Polisario, he fought and fights still, Palestine Palestine

Then stands alone in his own war, dying at the hands of his own

No one comes, no one sees, all alone he beseeches

He cries for the proclaimed independence, he screams for the acclaimed freedom

No one hears, no one comes, all alone he beseeches

Comes Bouteflika and his posse

Changeth the constitution and the law

Cometh the reconciliation and the percuss

Yo! Bouteflika, you might as well join the circus

He proclaims stands in glee and so the Terrorists go free

Mushroomed a bridge, then a highway, my Algerian man still sleeps in the gateway

Bouteflika swears the money is in the bank, he has yet to see some francs!

He showers sitting down, using a bucket and a dam

He borrows a houbla2 from his sister, eats her warm bread, spread with his mamma’s handmade jam.

He studied law, he studies tech, it’ll all come in handy holding up the walls

He hangs around the houma3, whistling at the girls passing by

When it gets a bit much, he’s put away for 18 months, it’s not the army, it is the waiting room.

From the gateway of the , to the waiting room, to hell on earth

No one comes, no one sees, all alone he beseeches

With his tight trousers around his crotch and his thinning hair around the top.

Is he Arab? is he Berber,? is he European? Neigh , his nationality is a sham.

Hell is getting warmer, the sirens call, awaits…

He takes to the boats, following the sirens’ chants; half of him drowns along the way

No one hears, no one comes, all alone he beseeches

Algerian man, arrives in , Ah the splendours, the land of cherub.

But my Algerian man, he is black, he is brown, he is Muslim. He is different

Nobody wants him, nobody cares, all alone at he stares

Starts anew; sweeps the streets, up the ladder,up he goes

Time elapses and he misses his pastures

He dreams of the Chorba, of the couscous and the Dolma

His mama on the phone, he cries about the Ghorba6, then marvels and laughs, this is my army, this is my waiting room

He is alone; he is a MAN, his hair still gelled, his pants still tight

He looks for Mrs Right; her skills are the Chorba, the Couscous and the Dolma.

Mrs Right ain’t so right, for she can’t cook worth a damn

With her manicured hands and her MBA brain, she can cook by the gram as long as Delia dictates

She has wind in her hair and a dress cut down to there, Barry Manillow sang about her

Mrs Right, she don’t measure up, her mouth is too big, her hair is too wild, her hips swing in shapes that make him sway, her lips are full, her eyes shimmer with pride, she is a temptress, she is fly, she is simply too much and this Algerian man runs a mile

His mother promises a princess from the east, her fingers are slender and her lips Oh so sweet

She can cook his bloody Dolma, she can steam his efing CousCous, and she will throw on a Jebba7

Makes him feel like a King, Algerian man oh how you sting

He wants a Muslima, he wants a whore, when he gets both, he goes AWOL

This Algerian chick is sick of your games; make up your mind or go to hell

Marry your cousin and call it a day, she will comply, she will obey, She'll wear the Jebba indoors, and the Burka out

Are you Salafi now? Or are you just sly, is it to run a business is it to sell bras

Your beard is too long, your trou are too short

doesn’t want to know about your beard, your fatwa and your needs

Stay in line, hold your principles, respect your woman, buy longer trousers and stop crying about your mother’s clone you want to marry, you know full well that’s not so savvy

Only then, this Mrs Right will show her face and maybe then and only maybe can she magically cook up a mean Chorba that will put your mama in a corner

Ah Algerian Man, who stayed behind

is yours, we left our share, it may be small but it’s all yours

Oh how your issues seem so different, we worry about Mr and Mrs Right, yet you worry about who to fight

You stand alone, you fight and you fight, with a lack of a seen-enemy, you turn on each other

I stand witness to this palaver

No one comes, no one sees, all together we beseech

Beseech Allah all mighty, beseech our dignity to stand all together. All against this corrupt power

Someone once said, will return our love one day

One day we will feel her love, warm on our skin, its sun so bright and its skies even clearer, its streets even cleaner and our hearts set free

Oh Algerian man, let’s not fight, you are my father, you are my knight, you are my brother, my man and my cousin, we’re in this together, accept it and you shall find your siren before you cross the seas and the make for the waves, for Algeria is your siren and I AM ALGERIA.