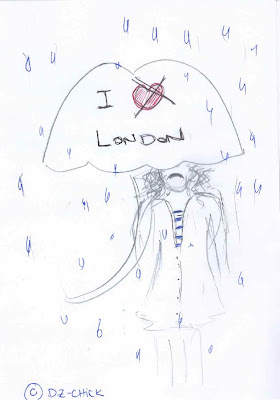 London looks as angry as it is infuriating, rain lashing out of the sky, the sun extinguished by the unrelenting downpour, sitting here at my desk in the City looking out of the what is supposed to be a window, for you see, I am not important enough to have window seat but I scavenge on what little light trickles through the window-office closest to my desk, its occupier often catches me staring in his direction from my seat and with the corner of my eye I can see him shaking his head. One pseudo-word: pffff

The summer comes in minutes not seasons, autumn comes in eras; time really is relative here. I own five umbrellas and for vanity’s sake 4 pairs of sunglasses mostly worn on hangover days.

The only tan here is the fake kind or the expensive kind that usually involves an exotic destination and an extortionately expensive flight – Benidorm then?

Oh summer where art thou!

This weather is playing pogo with me, my mood is changing by the minute, with every ray of sunshine that scurries through the grey clouds, I cheer up and love London, then it all goes morose again and I curse ….Coldplay who are not the second coming of the Christ you know!

No it is not hormonal and it’s not the passing of Venus across the surface of the sun and it’s not my friend’s amazing tan from her amazing Belize holiday, or her consistently unexplainable good mood, it is not people who use “summer” as a verb. It is the weather. This bloody, miserable, mind-of-its-own London weather, that is such a central part of our lives and conversations, we have to personify it to hate it better.

Breaking news: A rebellious ray of sunshine spotted somewhere near East Anglia (that’s Bordj Bou Ariridj for you in Algeria). Mark my words in the near future there will be a sun spotting sport. This will come into a more sane perspective when you check the current weather in Algiers or even France.

I read a quote by someone saying that "bad weather always looks worse through a window", except in London. There is no misrepresentation, it is as bad outside as it looks from inside, it is in fact so bad that even the sight of your soft duvet doesn’t make it better.

I think somewhere a new breed of ecological terrorists is laughing, their attempt at collective prayers for rain ( صلاة الاستصقاء) has been successful. You can quote me on that.

Dz-chick…mood weather forecast for tonight: Dark!
Posted by Dz-Chick at 18:43:00