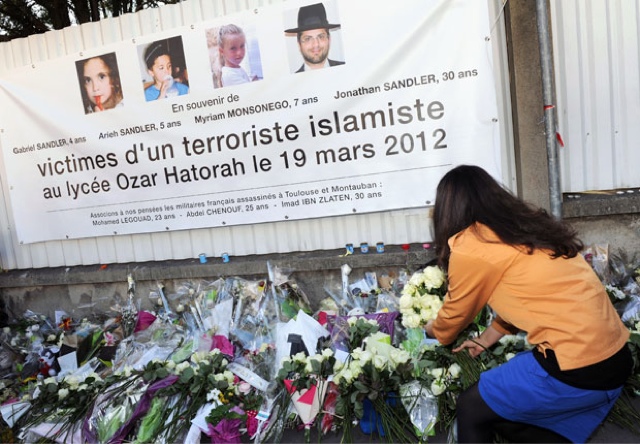 A home grown terrorist attack shook France last week, this, comes following a tirade or merciless killings Mohamed Merah, a young French man, went on, killing at least 7 people, three of which were children.
The apparently self proclaimed Al Qaida Jihadist allegedly filmed his crimes after he was seen with a camera around his neck and pledged to leak them on the net, he is said to have received Al Qaida training in Afghanistan and Pakistan.

It was also reported by his friends that Merah was a party animal, who regularly went to Rai nightclubs with his girlfriends whom he used to brag about.

Loving night clubs and Al Qaeda training, the two elements required to fit the profile of an islamist extremist to a T.

At this stage, and given the name of the assailant, the word “terrorist” goes hand in hand with Islam, and given that the victims were Jewish including the children and the Rabi, and finally another given being Mohamed Merha’s origins being Algerian, gives us the perfect terrorist.

Home grown terrorism is home grown for a reason, it is not Algeria that made him into what he is or was, it is not Algeria that instilled hatred and monstrosity into him, no one will ever know, if it was religious (despite his self-proclaimed allegiance to Al Qaida) or political or indeed neo-Nazi as some even suspected, all we know is that he was a very disturbed young man who committed despicable crimes…

What are the reasons for his actions? Avenging Palestinian children it was said? Was he starting the Palestinian spring in the heart of France?

I am not the one for conspiracy theories, but it could be argued that the French authorities and intelligence, having been aware of his trips to Afghanistan and his alleged Al Qaida training or at least his visits to Afghanistan, would have had him on radar. Furthermore, how can a 23 year old young man who presumably was under police surveillance, amass such artillery and commit several crimes petty or otherwise before he was even noticed.

Was he a product of French Intelligence? Some even argued Merah was used by the French authorities/secret services to create a national tragedy in which Sarkozy would come out the winning hero.

Having read multiple and contradicting articles on Merah’s life, between troubled teen years of petty crimes, Al Qaida training in Afghanistan and Waziristan and the final tirade of killings, one truly wonders how he was only 23. Perhaps the globe moves slower on his side of the planet!

Mohamed Merha died on Wednesday, after his home was raided by agents; he “overpowered” the snipers, their thermal camera-guns, gas canisters and high technology in his one bedroom council flat. Then on his last breath and frenzy he jumped off his first floor flat, guns blazing and plummeted to his death ending the long 30 hour siege. Actual cause of death a bullet to the head.

I wonder when the movie is coming out.

Muslims of France are left with the legacy of Mohamed Merah, rising islamophobia and promises of crackdown on any organisation that calls for violence or hate, but in true Sarkozy’s style, he’s probably going to arrest the next flight of pilgrims out to Mecca on grounds of suspicious behaviour and attire.

Pending the French presidential elections, Mohamed Merah’s has made someone’s spring but I doubt it will be that of Palestinian children, perhaps Nicolas Sarkozy? François Holland? Or Marie le Pen? Sarkozy has now gained momentum and moved to 1st place followed closely by Holland. I guess Spring is really here.