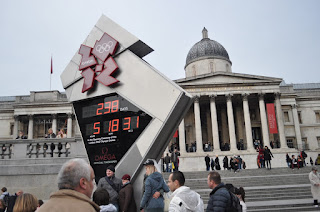 This morning on the train journey to work, standing in between two armpits, dandruffed shoulders and someone who forgot to brush his teeth,  I stood breathing cautiously suppressing my gag reflex and waiting for the train to move after what seemed like an endless stop between stations, caused by some signal failure, fatality or severe weather conditions or whatever bullshit they feed us on a daily basis (I lost interest), my mind wondered from my interminable book which failed to grip my attention four weeks in, I thought about the upcoming summer Olympics and how many more armpits I could be under and uncontrollably mouthed under my breath “ well that’s gonna be something” causing some nervous shifting amongst passengers and some dandruff to snow on me – GAG!
The Capital has been gearing up for the most awaited (and dreaded) event of the year, undergoing a very costly makeover ever since the bid was won in 2005, major works were undertaken on Olympic and non-Olympic infrastructure such as the London underground, travel links, bridges, sewage, cycle highway (God bless Boris and his love for biking) etc... amounting to a colossal figure estimated at over £9.3 billion (in 2007) which kept going up every quarter, arguably, we cannot blame poor forecasting, budgeting, or bad management, in view of the Market situation and inflation in the building industry, with steel and cement prices going up etc…
And this is as far I would go to argue the London Olympics side.
London will be heaving this summer, millions of people are expected to flood the capital, driving Londoners away, most employers have issued new Olympic related policies, allowing holidays during the fortnight or working from home as a solution.
People with a business mind and flare for opportunity are busy finding ways to generate income and making the most of this long-awaited opportunity, whilst others like me are thinking of ways to escape the London underground and its sweaty armpits.  It is disappointing to see how an avid Olympic supporter like myself and many others are put off and are planning their escapes, leaving our athletes with less supporters, especially Algerian athletes who I hope will spot a couple of DZ flags flying about the stadiums IF anyone can get tickets or indeed be bothered to queue up to get into the arena.
Of course we are fed the Olympic legacy bullshit; Olympics leave a major sports legacy for the community etc..., let me tell you about the legacy we’ll be left with; Debts, Debts and white elephants, ladies and gentlemen.
I can’t exactly say “there’s always next year” can I? We may never get to host the games again and let’s face it Algeria is not the best candidate out there to host the event, so for a HUGE Olympics buff like myself, I am going to grin and bare it, because I love London and having the Olympics at my doorstep makes me proud to be a Londoner.
But here’s a thought: Anyone knows where the Olympic flame is and if still burning? And If yes, who’s paying for the fuel?
Dz-Chick….Get your Union Jacks and your Sandjaks!
http://www.londonolympics2012.com/
----------------------
Sandjak  =  Old Ottoman name for Flag = used in Dz dialect to refer to the Algerian flag (anyone has a name for the DZ flag?)
Posted by Dz-Chick at 19:27:00